Excited to be going on this Residency!! Lots of photos and new work from Dawson City soon!

Thank you to the Ontario Arts Council 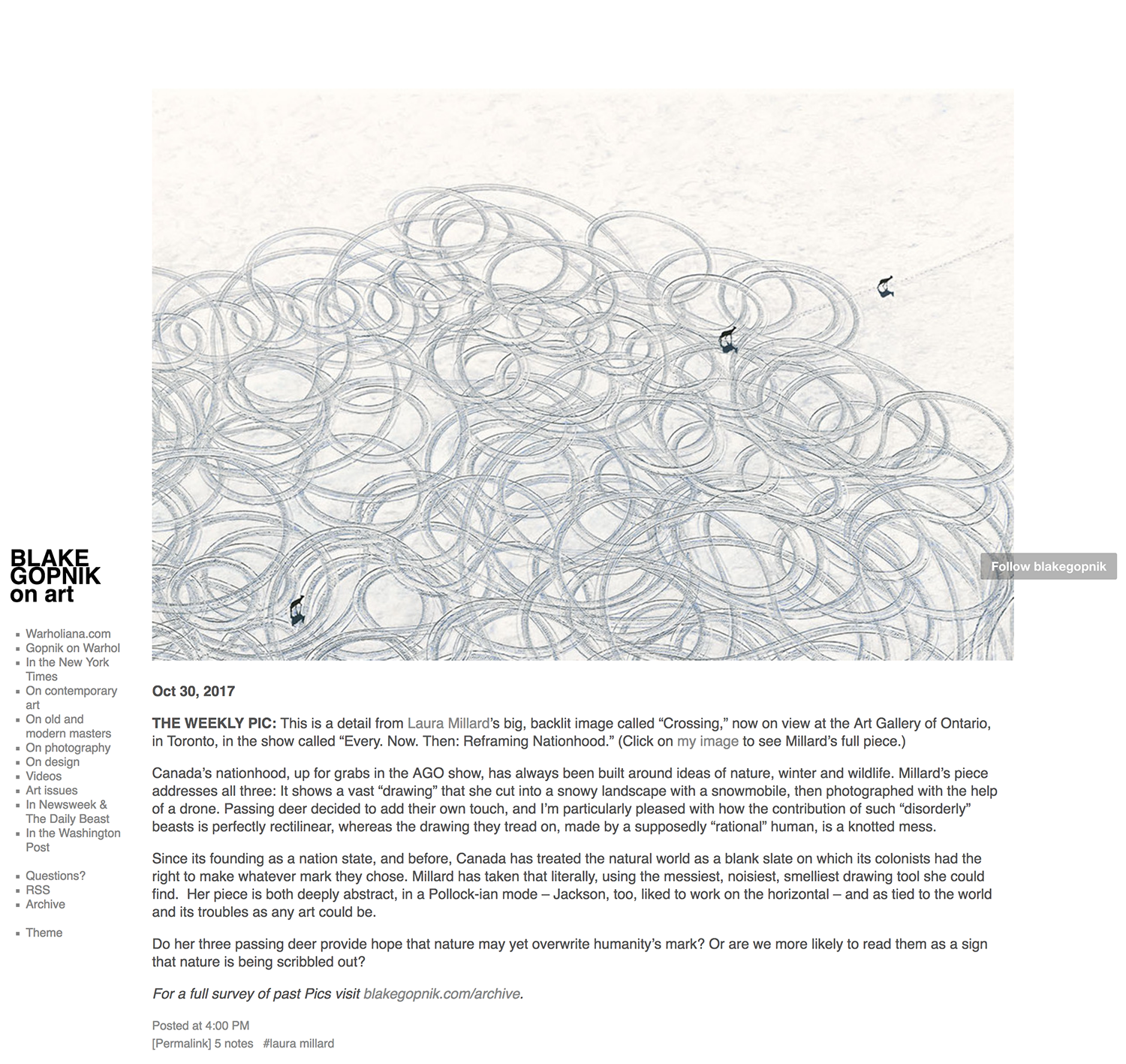 During the rush of time and water, a singular, contemplative moment is captured. With her telephoto lens Toronto artist Laura Millard has captured meltwater from the Columbia Icefields in this series of large scale works. Each one addresses the alarming rate at which our glaciers are receding while at the same time inspiring the viewer to experience a split second within that process.
In each of Millard’s painted photographs every drop has been suspended as a fragment of varying length by altering the camera’s shutter speed and either compressing or extending that instant. Motion, light and space animate our notion of passing time within the image and saturate the photograph with veils of falling water droplets becoming their own prisms against rock beds. Millard then spends much time considering and altering the surfaces of the photos and their elements. Months of careful over-painting lead to an intriguing dialogue between, artist, artwork, and viewer by accentuating some elements while further blurring others and in the process blurring the line between the work’s surface and the illusory space of the photograph.
Meltwater considers time: glaciers that may have taken hundreds of millennia to form are now melting away in the span of a few decades – an instant of that process is captured with a camera compressing those years into 1/60th of a second and then is extended over many months while paint is thoughtfully added.
Laura Millard has widely exhibited her work both nationally and internationally. She currently holds the position of Associate Professor at OCAD University in Toronto.

From Laura Millard on Artsync by Michele Speciale:

Living in a world where you can glance at the days’ top stories on your Blackberry in the time it takes you to walk from your bed to the bathroom; or skim your eyes over 24-hour news feeds streamed live from street corners and waiting rooms; it is virtually impossible for us to stay uninformed about what’s going on in the world.  Artist Laura Millard’s new series of paintings are asking us to slow down for a moment and consider that he difference between the act of looking at something and seeing it can be a whole world of understanding.

Millard’s Meltwater waterfall paintings immerse us inside Alberta’s dripping Columbia icefield glaciers, which contain the extent of our freshwater supply. Seamlessly melding painting onto photography, Millard has stopped time so we can actually see the slow process of these melting wonders. Using her photographs as a starting point, Millard’s iridescent and opaque brushwork accentuate prismic colours of sun-lit water droplets captured from 1/400th 1/1600th of a second, bringing their light to the foreground, while pushing back the rock face.  These contrasts create veils of imaginary layers, pulling us into a deeper sensation of spatiality.